Who doesn’t love some crispy roasted potatoes? These potatoes are ESPECIALLY tasty and packed with flavor. Why? They're roasted with harissa! The harissa gives them a bit of a spicy kick and the tahini sauce adds a nice, creamy element. All topped off with green onion and toasted sesame seeds—so delicious!

I’ve been wanting to share this recipe since the first time I cooked up the idea (and the potatoes) in my kitchen. The recipe wasn’t quite perfect yet and I had to test it many, many times to get it right. I tried different types of potatoes, different techniques, even different harissas!

At first I thought I would par boil the potatoes and then roast them but that technique didn’t let them get crispy enough. Then I wondered if I should roast the potatoes with just oil and salt and then toss them with the harissa afterwards. That batch was delicious, but ended up being more like a harissa potato salad. Which, makes me think, maybe I should do a recipe for a harissa potato salad?! Yep, adding that to the list.

Speaking of harissa, have you guys tried it? It's a delicious paste or sauce made with chili pepper, garlic, and spices. Harissa is most commonly used in North African cuisine but you can find it at just about any grocery store these days. For this recipe, I used spicy harissa but you could use mild if you wanted to. I linked the exact harissa I ended up using below so you can get an idea of what to look for in the store!

After all that testing, I settled on this technique. Dice the potatoes into ½ inch cubes (they don’t have to be perfect but they should all be around the same size) and toss them with olive oil, salt and the harissa and then roast them until they are nice and crispy! While the potatoes are in the oven, you can whip up the quick tahini sauce, toast some sesame seeds and slice some scallion. Everything will be ready by the time the potatoes are done so you can serve them hot out of the oven! 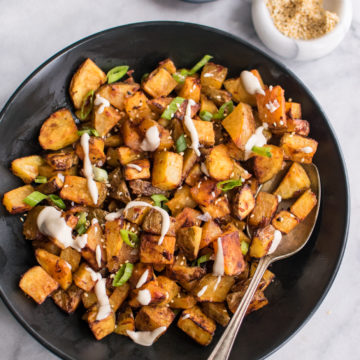 For the tahini sauce