The main difference between German potato salad and a more traditional potato salad recipe is the mayo, or lack there of. German potato salad has no mayonnaise and usually has some kind of mustard in it which is great for me because I love, love, LOVE mustard. In this recipe, I used tangy whole grain mustard. If you can't find whole grain, using a coarsely ground mustard like this one is a good option.

The mustard and the scallions make this potato salad really, really flavorful. And of course, sneaking in a drizzle of bacon grease doesn't hurt either. Bacon makes everything better, right?

It also is incredibly easy to make! All you really have to do is boil some potatoes, cook some bacon and then do some chopping and mixing.

Bring a bowl of this stuff to the barbecue and you'll be everyone's fave! 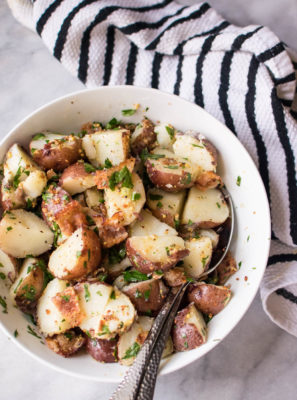