This recipe is meant for summer, when tomatoes are in season and in abundance! These tomato toasts are made with only a few simple ingredients but are one of the most delicious appetizers you'll ever try!

Pan con Tomate (also called Pa amb Tomàquet) is a Spanish tapas dish. As I'm sure you've figured out, the name translates to "bread with tomato" and that's exactly what they are!

The key to making these simple toasts extra delicious, is making sure you have the best ingredients. You'll need fresh, crusty bread, the ripest tomatoes, good quality olive oil, garlic, and flaky sea salt. Like I said, it's only a few simple ingredients, but once they come together—it's magic!

There are two ways to make the toasts. The first way is by grating the tomatoes into a bowl and spooning them over the bread. The second is to grate the tomatoes directly onto your grilled bread! With the first technique, you'll get more tomato but the second is more traditional. I can never decide which technique I prefer, so I always do both! Serving the pre-grated tomatoes in a bowl, AND a few cut tomatoes together makes it so people can try both ways and see what they like best.

Traditionally, it's just bread, tomato, olive oil and salt, but I like to garnish the toasts with some fresh basil and oregano. Hey, it's summer, I'm taking full advantage of the garden!

Sometimes I like to serve the bread with some Spanish cheeses and jamón, in keeping with the Spanish theme. If you can't find Spanish jamón, prosciutto will be just fine!

Serve these toasts as an appetizer or light meal. I can say one thing for sure, they taste best when eaten outside on a summer day! 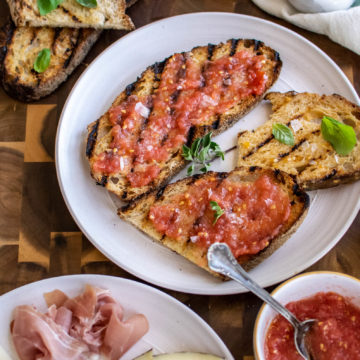 These tomato toasts are made with only a few simple ingredients but are one of the most delicious appetizers you’ll ever try!
Print Recipe Pin Recipe
Prep Time 10 mins
Cook Time 5 mins
Total Time 15 mins
Course Appetizer
Cuisine Spanish

For the Pan con Tomate