I have some opinions about Italian subs. They're not snobby opinions (I don't think) but completely reasonable ones. Bear with me while I bestow upon you, my thoughts, feelings, and rules about the Italian sub.

First of all, let's just address the name real quick. While I call it a sub, you might call it a hoagie, hero, grinder, whatever. This is a regional thing, nothing to get defensive over. Seriously, don't—it's weird. After all, they're all the same thing, right? A delicious sandwich.

Now, about the meats. People have differing opinions on which meats go on an Italian sub. For the most part, these meat variations are fine. There is one meat though, that absolutely has NO place on a good Italian sub (and yet I see it all the time?) and that meat is pepperoni. HARD NO on the pepperoni. Don't even try it. Get outta here. with. that. Pepperoni on pizza? Sure. Pepperoni on an Italian sub? Nope! Now that you know what meat we will not be including in this recipe, let's get to the ones that we are. My go-to meat line up is: boiled ham, soppressata or Genoa salami, hot capicola, and mortadella. You've got different textures, tastes, heat levels, and none of them overpower the rest (like a certain pizza topping would). The cheese is provolone, of course.

Back to the meats. I always use hot capicola, mortadella, and boiled ham. The only thing that changes is that I go back and forth between soppressata and Genoa salami from time to time. Both work well and both are delicious. It just depends on my mood and where I'm buying the meat from.  In the picture above, I have hot soppressata! Use whichever one you want, just don't use pepperoni. I usually buy the meats from an Italian deli but most grocery stores will have them too!

I'm telling you, you're going to love the meat lineup. Also, when you're stacking the meats on the sandwich, make sure to fold them up, that way you'll end up with those meat ruffles. It's all about the meat ruffles! Should I not call them meat ruffles? Oh well.

Alright, let's talk about how to build the sandwich. I like start with the cheese, then pile up the meats. Next, I layer on the tomatoes and, here's the important part, season them with salt pepper and oregano. The seasoning sticks to the tomatoes—it's a good move! Just go a little easy on the salt, because the meats are already salty. Pile some crisp, shredded lettuce on top of the tomatoes and give the whole thing a good drizzle of olive oil and red wine vinegar. Then, if you know what's good for you, top it all off with some giardiniera.

If you've never tried giardiniera, hold on to your butts because you're in for something verrry special! Okay, I don't know what giardiniera has to do with butts but whatever. You know what I mean!

Giardiniera is basically chopped vegetables that are pickled and then marinated in olive oil. Giardiniera originated in Italy, but you're probably more familiar with the version that's famous in Chicago. If you're not in Chicago, you're in luck! Nowadays, you can find giardiniera all over the country, or order it online (linked below!).

We keep both hot and mild giardiniera in our house at all times (it's a necessity!) but I prefer to use mild on my Italian subs so that the heat doesn't overpower the flavor of the meats. Feel free to use hot or mild on your sub though—that's your call!

Get your Italian deli on the horn, it's time to make a sandwich! 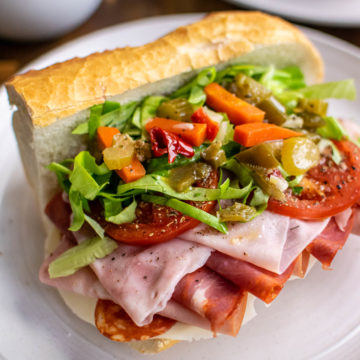