There's a lot that Joey Tribbiani and I have in common. We both have Italian backgrounds, we both think that Chandler Bing is hilarious, and we both LOVE sandwiches.

I could probably eat a sandwich at every meal for at least a week and not get sick of them. I can't say that I've tested that theory but, if I were going to, this sandwich would definitely be in the line up.

What makes this sandwich so good is the slaw. A crunchy, vinegar-y slaw is always a good idea in my book but, this one's got toasted caraway seeds in it so it's extra special! The caraway goes great with the ham, cheese, and pickles.

I haven't tried it but, I suspect that this sandwich would be great with Gouda, Havarti or Butterkase cheeses as well. Feel free to experiment with whatever you like! I mean, it's a hot sandwich, it's going to be delicious.

If you don't own a panini press, you can cook the sandwich in a cast iron pan with a weight, such as a smaller skillet or a foil wrapped brick, on top. I've also linked some panini press options below.

Okay, that's enough rambling on about sandwiches. Here's the recipe. 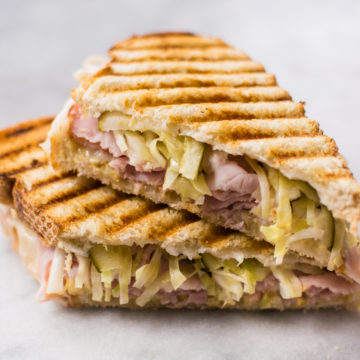 For the Caraway Slaw